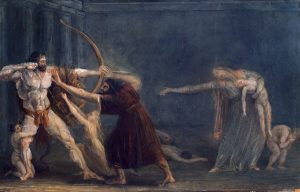 The painting “Hercules Firing Arrows at His Children,” by Italian artist Antonio Canova is a moving work of genius. The brilliance of this painting is revealed in its delicate use of detail to express the moment and in the way it expresses emotion. “Hercules Firing Arrows at his Children” was painted in 1799 using oil on paper and glued to canvas. It is 42 X 66 cm. The painting features the infamous madness of Hercules. After being driven mad by the goddess Hera and by drink, he murders his whole family in blind furry. When finally sober, Hercules is surprised and heartbroken by his actions. He agrees to twelve labors in order to partially atone for his sins.

“Hercules Firing Arrows at His Children,” depicts the moment of madness from this legend in a cruel and powerful manner. The painting features Hercules in the left foreground with a bow in his hand. His face shows anger and insanity. He is painted in great detail and showered in light, as if all of his anger is channeled through the light. He is also the only source of light in the painting. The rest of the people are painted in muted hues. The painting also features women and children struggling with Hercules or hiding in the corners. A man attempts to stop Hercules from committing murders by placing one hand on Hercules’ bow and another hand stretched towards his face. The artist uses subtle color that is both symbolic and dramatic. The overall painting captures tragic fury and uncontrollable calamity.

The painting is a perfect example of a powerful work of art, and reveals the possibility of creating such great art with the brush. The best art conveys something essential about human nature, and it can be revealed through any medium and with nearly any material. Although it portrays death, “Hercules Firing Arrows at his Children” also tells its viewer a great deal about life.