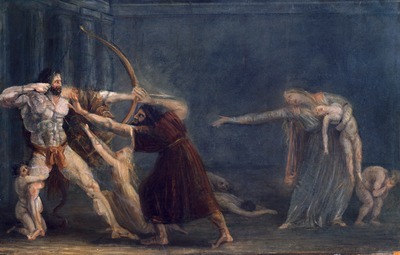 es Firing Arrows at his Children,” is a captivating and great work of art. Both the subtle use of detail to convey meaning and the way it conveys emotion makes this painting a masterpiece.  The painting is 42 X 66 cm. It was painted in 1799 with oil on paper and glued to canvas. “Hercules Firing Arrows at his Children,” captures the exact moment when the legendary Hercules went mad and killed his entire family. He was under the influence of alcohol and the goddess Hera. When he was no longer drunk, Hercules was stunned and distraught by his terrible actions and partially atoned for his crime by agreeing to twelve labors.

Although it is a frozen scene, the painting reveals the action of the moment in a brutal and effective way. Hercules is featured in the left foreground of the painting, in full light, with his bow in his hand. Both madness and wrath can be seen in his face. While Hercules is doused with light, the other images in the painting are shadowy. It seems as though Hercules is the light himself, as if the light represents all of his anger. The painting also features other women and children struggling with Hercules as well as some people hiding in corners of the room. There is a small child, perhaps his son, wrapped around his leg. The artist’s use of color is just enough to be expressive and suggestive. All these techniques used by the artist come together to reveal the uncontrollable catastrophe and heartbreaking fury.

“Hercules Firing Arrows at his Children,” is a perfect example of a powerful work of art. It reveals just how powerful the medium of painting can truly be. What is great art? Great art has the ability to capture something innate about human nature. While painting is a powerful medium, great art can be expressed using any medium and with almost any material. “Hercules Firing Arrows at his Children,” conveys as much about life as the death that it captures.