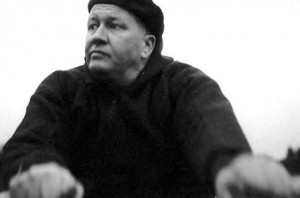 The poetry of Theodore Roethke is introspective, and contains lots of strong natural imagery. This has a lot to do with Roethke’s roots in Saginaw, Michigan. He grew up on the Western side of the Saginaw river, and much of his childhood was spent watching his father work in his greenhouse. Otto Roethke was a market gardener, who worked a 25-acre greenhouse until he died of cancer when Theodore was just 14.

The death of his father, coupled with the suicide of his uncle, affected Roethke deeply and fed into the introspection his poetry often exudes. Roethke attended the University of Michigan, earning a B.A. and eventually a Masters before trying his hand at law school at Harvard. It was at Harvard that he encountered the poet Robert Hillyer.

He was forced to abandon his studies at Harvard because of the Great Depression, but he took on work teaching English at local universities in Michigan. He was expelled from his position at LaFayette, one of many universities that he graced, and returned home. It was revealed that he’d had an affair with Louise Bogan, who had been an early supporter of his work.

Roethke was deeply depressed throughout a great deal of his life, and spent a large amount of it drinking and keeping to himself. He married one of his students in 1953, Beatrice O’Connell, who spent the rest of his life supporting his work and trying her best to understand him emotionally.

Roethke died in 1963 in the swimming pool of a friend. He suffered a heart attack. The pool was later filled with concrete and turned into a Zen Garden, which the public can view at the Bloedel Reserve.